It was a beautiful day to celebrate the re-release of Lucy Buffett’s popular cookbook. Lucy and her were host to a launch party at her Gulf Shores restaurant on Tuesday, April 26th as guests enjoyed complimentary refreshments & cookbook recipe samples.

Lucy self-published her cookbook, Crazy Sista Cooking, in 2007. Having sold over 70,000 copies, Lucy partnered with Grand Central to give an updated look to her collection of recipes and stories that made the Crazy Sista Cooking such a hit with readers and guests of her restaurants. Just released this month, the updated and repackaged version is entitled LuLu’s Kitchen, A Taste of the Gulf Coast Good Life.

LuLu’s Kitchen is Lucy Buffett’s culinary guide to classic Southern coastal cuisine and is packed with more than 120 signature recipes, originating not only from her childhood along the Gulf Coast, but also from the kitchens of her popular restaurants. This updated version includes a new introduction and headnotes, humorous stories and plenty of wit and wisdom from the original Crazy Sista. Featuring party menus, Buffett family favorites, and stories from Lucy’s own kitchen, this is a fun compilation to enjoy trying out her recipes, or perfect to just sit and read. Recipes include soul-satisfying Southern Coastal Cuisine delights like West Indies Salad, Perfect Fried Shrimp, Blackened Grouper Sandwich, Garlic Cheese Grits, Silver Queen Succotash, Key Lime Pie with Grand Marnier® Whipped Cream, and Krispy Kreme® UnChristmas Bread Pudding with Vanilla Custard Sauce. Lucy has included a whole chapter of specialty drinks, including cocktails such as the “Bama Breeze” and “LuLu’s Painkiller.”

Lucy Buffett is more than the sibling of famous troubadour Jimmy Buffett, just as her business, LuLu’s, is more than a restaurant. As creator of the LuLu’s brand, Lucy has taken her initial dream, LuLu’s in Gulf Shores, to become a destination in itself serving some 750,000 customers a year. She opened her second LuLu’s location in Destin, FL in the summer of  2015 and it is sharing the successes of her Gulf Shores location.  From restaurants to clothing lines, cookbooks, Bloody Mary Mix, seasonings and sauces, a children’s book and the newly-launched Crazy Sista Honey Ale beer, Lucy Buffett combines true Southern graciousness and authenticity with the nerve of a successful entrepreneur. To learn more about Lucy Buffett, visit www.lucybuffett.com. 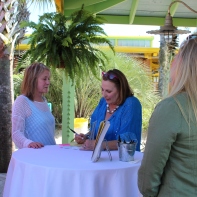 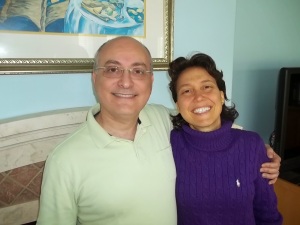 Vitina and Stephano Feo are business owners with an enduring passion for keeping their heritage alive and educating the public about what the olive oil industry is really about. Vitina was born and raised in Venezuela while Stephano is from New Jersey. They met in California while Vitina was studying at UCLA. They married, started a family and came to live in Gulf Shores, Alabama to be closer to family that had already settled in the area. Prior to 2012, Stephano’s focus was on his accounting practice and Vitina was busy home schooling their children while working from home for a technology company.
During a recent visit to Italy, Stephano and Vitina happened to cross paths with a distant relative of Vitina’s father’s family. He insisted that the couple come visit the family’s olive mill. They learned that the son of the family was trying to promote their olive oil in Canada. After the Feo’s returned home they started comparing the oil that the Giaramida family was producing to what was being sold here in the United States. That market research uncovered a quite a difference between the family’s olive oil and olive oil that was currently on shelves for public consumption. Further research into the industry itself revealed many differences – none of which they believed were cause to celebrate. These findings were part of the reason the Feos decided it was an opportune time to introduce a quality olive oil in the United States.
The couple knew that in order to get this product into stores, people must taste it. Their first introduction to the public was at an annual community event, the Mamma Mia cookoff – a celebration of Daphne’s Italian heritage sponsored by the city’s educational enrichment foundation. The response to the product spurred their initiative to bring the oil to local market shelves. Their hard work along with in store samplings have allowed them placement at Joe Patti’s Seafood and Apple Market in Pensacola, three Piggly Wiggly in the Birmingham area in addition to the Piggly Wiggly stores in Fairhope, Greer’s Fairhope Market, all of the Rouses Markets in Alabama and two locations in Foley, A Better Way Health Store and Burris Farm.

The family oil was branded Papa Vince in honor and appreciation of Grandpa Vincenzo Biondo who started as an apprentice in the olive orchards of the Castello Rampinzeri in Santa Ninfa, Italy. He mastered the art of raising the nocellara olive and the artisan trade of producing extra virgin olive oil. He often referred to his olive oil as “liquid gold”.

In 2008, the operation’s pressing facilities were updated to meet growing demand and also to  ensure the highest quality product. There is no waste at their facility. Byproducts consist only of compost used to fertilize the orchard and olive pellets which are a source of clean heating.
The Feo’s company is Mamma Mia USA and the product is distributed out of their warehouse in Gulf Shores. The product is grown, pressed and bottled on the property in Sicily. Their oil is contains immeasurable nutrients, polyphenols and antioxidants. Papa Vince’s extra virgin olive oil is 100% organic, is totally free of additives and is not blended with other oils like its competitors.
But the ultimate proof is in the taste the product. It’s flavorful and full bodied. You can taste and smell the freshness, the unique quality because it is not mixed with anything else. It is freshly squeezed olive. My words cannot fully describe the uniqueness of this products. To experience its’ full essence, you must taste it yourself.
Mamma Mia USA, 3757 Gulf Shores Pkwy, Gulf Shores (251) 269-6000
Facebook “Papa Vince Extra Virgin Olive Oil” • http://www.papavince.com