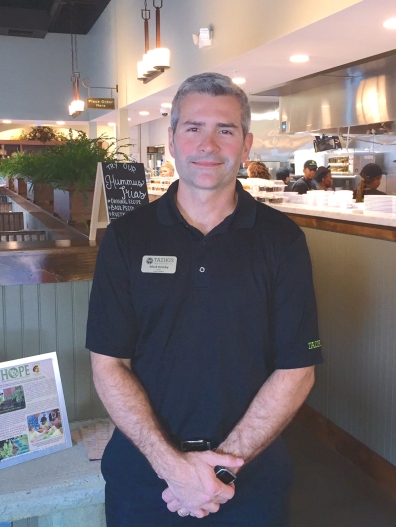 Mark Hemby was a successful investment banker in Birmingham, Alabama.  He came to a point in his career where he decided that he needed to take a new direction. When someone asked him if he could do anything he wanted to do his first response without even thinking about it was “move to the beach and open a restaurant”. And in a roundabout way, he did! Food hospitality seemed to resonate with Hemby. He finds satisfaction in serving people. During the time he lived in Birmingham, he frequented one restaurant in particular. That restaurant happened to be original Taziki’s that first opened in 1998.

During his “crossroads” period, a mutual friend introduced Mark to Keith Richards, Birmingham resident and founder of Taziki’s Mediterranean Cafe. Hemby subscribes to the philosophy that you have to believe in what you are selling and he was sold on Taziki’s. After some time and consideration he inquired about the Mobile/Baldwin territory and signed on to open his own. That was in April of 2015. The Daphne location opened this July.

Taziki’s is not your traditional Greek restaurant. They are Mediterranean inspired with a Southern influence. Simple ingredients, made from scratch recipes that focus on healthy approach to fast casual. There are no freezers, fryers or microwaves in the restaurant. The team at Taziki’s makes over 100 items in-house everyday. They cut their own fruit, vegetables and meat along with mixing their own sauces.

Another take away from the Mediterranean culture that is prevalent in the Taziki’s restaurants is the family friendly, casual environment. Each restaurant hosts a “community table” that is incorporated into the design of the dining area. Guests and large groups can interact with other while enjoying their meal. They also offer a beer and wine menu to enhance your meal and dining experience.

The menu includes appetizers of hummus, taziki dip or spicy pimento cheese – all served with soft or baked pita chips, soups and salads, fresh filled gyros with your choice of a variety of meats and veggies, Mediterranean deli sandwiches and full entree “feasts” that are served with a Greek salad and your choice of basmati rice or roasted new potatoes. The protein choices include chicken, beef or pork tenderloin, lamb, salmon, shrimp or tilapia. Sides include pasta salad, fresh fruit, tomato-cucumber salad, basmati rice or roasted new potatoes. Daily specials are displayed on a chalkboard and vegetarian and gluten free options are plentiful. Taziki’s also offers a Fresh Take Home Dinners for 4 that feature grilled chicken breasts, whole baked chicken, herb-roasted pork loin and grilled lamb. There is a children’s menu for kids 12 and under and desserts include baklava, chocolate cake and chocolate chip cookies.

This Alabama originated company also cares about the community. Taziki’s re-invests through sponsorships, food donations and by using local produce. They also sponsor the HOPE (“Herbs Offering Personal Enrichment”) Project, a vocational study partnership that allows special needs students to learn all aspects of the herb business. The Daphne location will partner with Daphne High School on this project.

If you haven’t already, be sure and stop by Taziki’s 59th location and welcome them to Baldwin County. 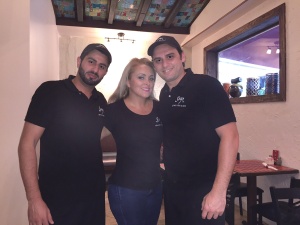 Nader El-Salibi and Marwan Yousef met each other while working in a Lebanese restaurant in New York City. They were both students at the time who had come to the United States to study at Brooklyn College. It was around the same time that Nader met also met his wife Maritza. After college, Nader and Maritza married and the couple moved to Ecuador, South America to put their degrees in Finance and Business management to use. Meanwhile Marwan made his home in New York. Marwan happened upon Fairhope, Alabama when he came to visit his father who had moved to the small city on Mobile Bay’s Eastern Shore. After just a two week stay, he decided that he would not be returning to New York. He began working with his father, who is a master tailor and upholster. While both men were following family business traditions they still longed for the fulfilment that the food industry was able to provide them with. Martiza herself is a formally trained pastry chef. In addition to running their family business, she and Nader started their own catering operation in Ecuador and would spend their weekends involved with food preparation for parties and events. A telephone call around Christmas of 2014 was all it took for Nader and Marwan to get the wheels in motion for a reunion that would result in a tasty joint venture by the name of Sage. Marwan had done his research and knew that this area needed some different flavors and healthier dining options that he his former kitchen cohort would be able to authentically provide. He urged Nader to come visit Fairhope and see for himself. That was all it took. The guys signed a lease on a vacant spot on Fairhope Avenue and Nader phoned his wife, Maritza and told her to do what was necessary with the business, pack up the children and join him in Alabama. The three worked together on remodeling and construction of the interior of the new restaurant. It was construction by day and menu tweaking at night. They have been overwhelmed by all the support from the locals since they even started construction and are very thankful to the neighbors and friends who have helped them along the way. Sage offers authentic Lebanese Cuisine and includes appetizers such as hummus, baba ghanoush, falafel, grape leaves, kibbeh and labneh. They have a tabouli salad in addition to two other mixed green salads that can be accented with chicken or falafel. Pita and French Breads are used in a variety of sandwiches that are offered. Chicken Shawarma, Beef Shawarma, Chicken Gourmet and Falafel Sandwiches are available. For those diners who are looking to step outside of the box without a total commitment there is a grilled 3 cheese and sundried tomato sandwich and also a veggie stacker sandwich. Sage offers a different daily dinner special in addition to the dinner entrees on the menu that include shish kebab, chicken kebab, kafta kebab, lamb chops, a kebab mixer and a NYC style chicken over rice. In addition to traditional beverages, Sage also offers Turkish coffee, Turkish iced coffee, Lebanese Iced Tea and Sage Lemonade. Ask about their “sweet of the day”. They do not currently serve alcoholic beverages but if you would like to BYOB there is no corkage fee. Hours of operation are Monday through Saturday from 11:30am until 9pm. Sage Lebanese Cuisine & Cafe, 319 Fairhope Avenue, Fairhope (251) 517-7536 • http://www.sagelebanesecuisine.com • Facebook “Sage Lebanse Cuisine & Cafe”