When the LeJeune family purchased Daphne’s Market By The Bay in 2004 it was a full service seafood market. Chad and Robin, along with their parents, Vic and Hollie all worked the business providing the freshest seafood from local waters along with fresh salmon and other non-indigenous catch that was flown in. Over the years they built their business according to what their customers requested. A kitchen was added so they could provide take out meals. To begin with, Market By The Bay offered a basic seafood menu – fried shrimp and oyster po-boys. It was well received and a couple of tables were added to accommodate guests while they waited for their orders to be completed. Those tables began being utilized for a dining area and take-outs turned into sit and eat so a few more tables and booths were added.
Because of the success of the restaurant portion of the Market in Daphne, the LeJeune’s opened a Market By The Bay Restaurant in Fairhope in 2007 to enhance their family business.
The BP Oil spill that occurred in 2010 was a bit of a set back to both of their locations but fortunately they were able to push through. They are now in their 10th year and the Daphne location has just undergone a remodel and makeover. They are making the transition into more of a restaurant versus a seafood market- more seating, less market. The menu is now quite hearty and offers not only fried but also grilled seafood – shrimp, oysters, fish, crab claws. Dinners come with your choice of sides. Choose from french fries, hush puppies, cole slaw, potato salad or baked beans. For a little bit extra you can get a side salad, onion rings or fried pickles. Salads are available (including West Indies) along with po-boys and gumbo. They even have “Market Specials” which are a smaller portion of the regular dinner. In addition to seafood, chicken and an old fashioned hamburger are options for folks that can’t or don’t enjoy seafood. Children can choose from fish, shrimp or chicken along with one side, juice box and a cookie. Market By The Bay makes gumbo fresh daily and it can be purchased in large quantities. 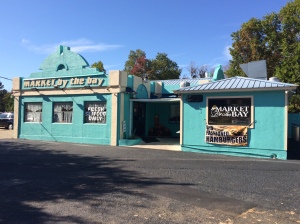 The Market at Daphne’s Market by the Bay continues to offer local shrimp, crabmeat, oysters and a daily fish. Now that the Holidays are here, be sure to place your orders (by December 15th) for crabmeat, oysters and gumbo for seasonal parties and dinners. Daphne’s Market By The Bay location is open Sunday and Monday from 11am until 3pm and Tuesday through Saturday from 11am until 7pm. Market By the Bay, 29145 US Highway 98, Daphne • (251) 621-9664 • Facebook “Market By The Bay Fresh Seafood

WHO IS EAT BEAT