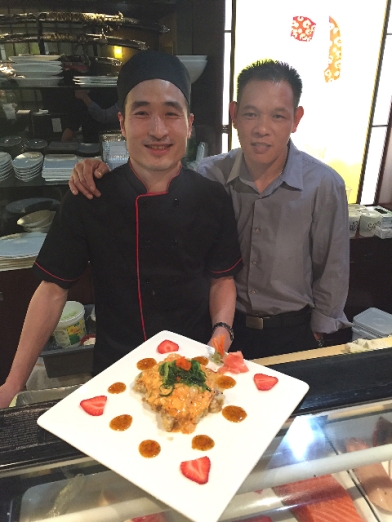 Since 2007 the hibachi tables at Tokyo Japanese Hibachi and Sushi have been host to many memorable meals that include fire, knives and clanging spatulas. Mr. Adam was a familiar and friendly face greeting patrons who frequented the Fairhope establishment. Recently, he sold the business and moved to Atlanta to pursue other interests. The new faces you will see are those of Andy and Jacky. They are partners and the new owners of the Tokyo Hibachi and Sushi. They purchased the business and took over operations in December of 2015. They have added some booths to the dining area to give it a different look but the menu has remained the same with just with a few special additions. The focus now is not only on quality but also on presentation. They want the food to look as good as it tastes. Jacky spent 12 years working in New York as a sushi chef and brings his talents to Toyko’s sushi bar while Andy’s prowess is unmatched in the kitchen arena. The partners are truly the Yin and Yang of sushi and hibachi. They are also  fortunate to have an incredible support staff that recognizes their talent and hard work.
The extensive menu  includes appetizers of spring rolls, gyoza, tempura asparagus and calamari, soft shell crab, edamame and more, salads galore – house, cucumber, seaweed, kani, avocado, seafood – just to name a few, chef’s special sushi rolls, regular sushi rolls, Nigiri sushi or sashimi, sushi platters, Hibachi dinners that include chicken, shrimp, scallops, lobster, steak and filet mignon, a Japanese Kitchen menu that includes Teriyaki, Tempura, Katsu and Don Buri and a variety of noodle dishes. A separate and abbreviated lunch menu is offered from 11am until 2:30pm with Hibachi grill items, lunch roll combos and Bento boxes in addition to the regular menu.
They are open daily for lunch and dinner but close between 2:30pm and 4:30pm. You can access their website www.fairhopetokyo.com for online ordering or reservations.
Tokyo Hibachi and Sushi, 94 Plantation Pointe Shopping Centre, Fairhope (251) 990-2218,  www.fairhopetokyo.com

WHO IS EAT BEAT